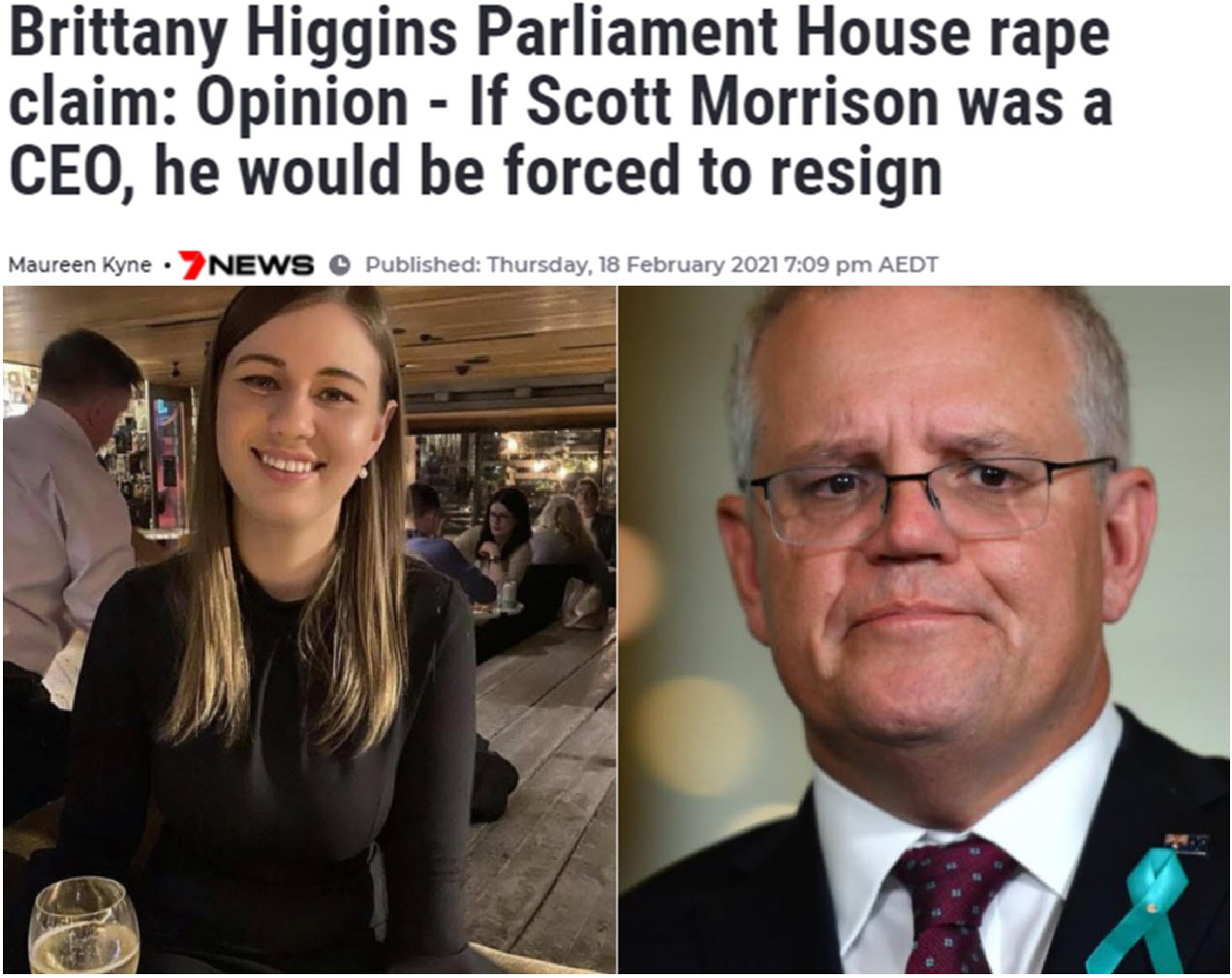 What happened to 24-year-old Ms Brittany Higgins following an alleged rape at Parliament House in Canberra exposes the shameful flaws in our government’s own workplace policies.

Parliament House is a place where decisions that shape our nation are made, and it’s a place for celebration and memorial. Most importantly, it is a place for all Australians.

It was also the institution where Ms Higgins wanted to pursue a career in politics. But she’s learned the hard way that a mercenary culture still permeates the corridors of Canberra.

She alleges she was raped by a colleague in a Ministers office after a night out in March 2019.

Ms Higgins felt forced to choose between reporting the matter to the police or keeping her job so what does this tell us about the culture she is working in?

The government has failed the system it is meant to uphold. The Prime Minister’s response suggests he and his Government is completely out of tune with the cultural shift demanding increased accountability for workplace sexual misconduct.

The incident calls into question the reputation of our Prime Minister who until he spoke to his wife, Jenny, wasn’t really clear on the gravity of what had occurred under his watch.

In fact, Mr Morrison only announced a review into workplace culture of Parliament House after speaking to his wife and after considering how he, as a father, would want his daughters to be treated.

If the Prime Minister had been the CEO of company, his reputation would be tarnished and more than likely he would have been forced to resign amid allegations and an investigation that  he failed to provide a safe workplace.  If he were the CEO of an ASX company, there would be shareholder revolt over the board’s mishandling of the sexual assault in its office.

The Prime Minister shouldn’t need to consult his wife to know that women who have allegedly been raped should be supported and those in power that knew about it, held to account.

The behaviour shown by our Prime Minister and his Ministers and their staff doesn’t meet workplace health and safety standards and they all need to be called out on it.

This is not the first time Canberra has been rocked by a series of sexual harassment and misconduct with allegations where leaders have failed to handle them appropriately.

Canberra needs to change if it is to create a safe workplace and a sound culture.  Responsible behaviour in the workplace is something some of our politicians still struggle with and Ms Higgins experience sends a dangerous message that they don’t respect and uphold their own workplace policies.

Importantly, both sides of Parliament need to come together on this important issue.

It’s a sad day when we learn that reporting an alleged rape, things get worse, not better. We can only hope a review into workplace safety at Parliament House will ensure there are no more Brittany Higgins.